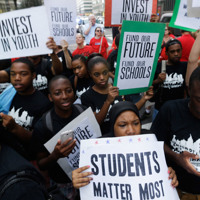 Former City Councilman Bill Green has a big job ahead of him as he assumes the chairmanship of the Philadelphia School Reform Commission. The District is dealing with a serious budget and funding crisis, a teacher’s union that is slow to negotiate a new contract, and most importantly, the challenge of getting students on track to achieve (currently 45 percent of the district’s children are reading below grade level). In this hour of Radio Times, Marty talks to former City Councilman Bill Green about his vision for education and how he can fix what many consider to be a broken system.

Donate to WePAC and make a difference in Philadelphia.